Skip to content
Plan and Pre-plan:
Till 10 in the night on Saturday, my plan was to go to Chamundi hills alone and be back by evening. But thanks to Dr. Prithvi Raval, Here it is how internet comes to our help. I came to know about Girish’s plan of riding to Shivasamudra, a fellow BN through BikeNomad (Forum/Yahoo Group). I got Girish’s phone number from Doctor and confirmed about the trip. After discussing about which route to take, we decided to take Mysore instead of Kanakapura road. Reason being – 4 lane highway for about 80 KMs. Our plan was to meet at Banashankari around 0630 hrs, and from their start the journey. 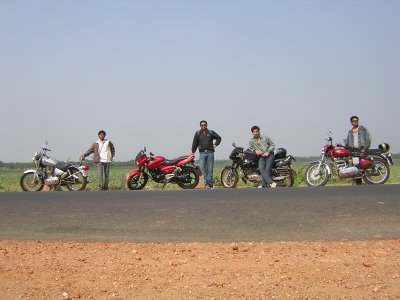 Introduction:
Got up early @ 0520. Thats too early on a Sunday morning. By 6, I was mounting my Cramster Turtle on my Black Pulsar. Called up Girish confirming that I will be in Banshankari by 6.30 and started to the meeting place by 6.05. I was there by 6.25 and was expecting those guys to turnup bit late. But surprisingly they turned up in time. After brief introduction – just got to know the names and handshakes.After air-check of Girish and Sachin’s bike, I was leading the way since other three didn’t knew the route to Mysore road.

Fuel hunt & Breakfast:
Intial 40-45 KMs was a bit slow, searching for a petrol bunk which accepts credit card. Sachin was adamant to pay by cash. But he gave up, and filled his bike in Ramnagara by paying by cash. Once filled, we speeded up towards Maddur, our next stop – for breakfast. Reached there by 9 or so. Had breakfast in a hotel just before Maddur and a brief photo session.

Our journey continued and we took a left just after Maddur. The milestones were saying we are still another 45+ KMs from our destination. Our next stop was in between Malavalli and Maddur (Don’t remeber the place’s name). It was very scenic – paddy fields on one side and a water-body on the other. It was time for another photo session and flex our muscles.

When we were about to leave, there came an another group of bikers and stopped for photo session, some 200 mtrs ahead of us. After the brifge, the standard of the road started detirorating. By the time we had covered, we were on bumpy road full of potholes. And hence our speed dropped. Once we crossed Malavalli, road became better and were back to higher speed. Our next stop was ‘Shiva Hydroelectric Station’ – since no one is permitted inside (security issues), we headed towards the falls.

When we reached Gaganachukki, all of us were desperate to jump in to the water. But the local shopwala said its very dangerous to go near the foot of the falls. And he suggested us to move further up where we can easily take bath. We followed his directions and found a very much suitable place for taking bath. Rana was first to jump into the water and last to come out. Its very easy to convince a hippo to make him come out of water than making Rana coming out.
After spending a good one hour in water, we headed towards Bharachukki. First thought that came to our mind was – “We should have come here first before going to Gaganachukki” :(. In the end due to time constraints, we decided not to jump in to the water. Instead we took a boat ride (not exactly a boat, its circular in shape and made of bamboo – we call it as ‘theppa’ – ‘?????’ in Kannada.

We started of back towards Bangalore around 2PM after a brief visit to Darga near Bharachukki. Stopped for lunch @ Malavalli. After reching the Mysore road, we (Sachin and Myself) lost track of Rana and Girish. So almost 40 KMs was total economy ride, riding at 40-50KMph and takind breaks every 10-15 KMs to cool our *you-know-what*. Both of us reached Kengeri by 6.30PM and still no sign of Rana and Girish. As both of us had other appointments, we departed. From there, I went my friend’s house and then back home. Reached home at 7.30PM and my bike’s tripmeter showing 306.3 KMs – so far longest ride in a day for me.
That was the end of my first ride in a group. But still the beginning – still a long way to go. As Srikeerti says – “Another weekend, another place visited, another satisfied biker.” 🙂

5 thoughts on “Bitten by the Riding Bug”